Shio Kōbe (神戸 しお Kōbe Shio) is a young, innocent girl who lives with Satō Matsuzaka in her apartment. She loves and cares for Satou deeply, but she often remains blissfully unaware of Satou's endeavors aside from Satou's necessary attendance in school and work, as she is not allowed outside of the apartment.

Shio has black hair that is tied into two pigtails and big blue eyes.

She usually wears a sailor-style school uniform which includes a light blue long-sleeve shirt, a striped blue bow tie, and a blue plaid skirt. Since Shio rarely ever goes outside, she is never seen wearing shoes but she wears black under-the-knee socks.

Shio is a kind and innocent eight year girl who tries her best to work hard and watch over the house while Satō Matsuzaka is away at school and work. She routinely greets Satou whenever she returns home and is always genuinely happy to spend time together with Satou. Shio believes that both she and Satou need to stay together, otherwise they would both be broken and incomplete forever.

While her interactions with other people besides Satou are limited, she still displays the same kindness and sincerity she would with Satou, which draws many people to her. She is typically referred to as an "angel", a "light", "the Moon", and other otherworldly symbols and beings, suggesting that her purity is a rare and enlightening trait of her personality that makes her almost ephemeral.

When Shio was born, Yūna Kōbe (Shio's mother) felt sorry for her because she was born into a cruel world with her abusive father. However, Asahi Kōbe (Shio's older brother) suggested to his mother that they should work hard to protect her, and Shio soon became a ray of hope for the two of them. At some point, Asahi urged his mother to run away with Shio and he would stay behind so that their father wouldn't try to find them. He promised to return to his mother and Shio, and made a vow.

Eventually, Shio's mother found a place for them to settle in, waiting until the day Asahi returned, but struggled to keep up with paying rent because of her inability to get a well-paying job. Shio noticed that her mother was slowly breaking apart and tried her best to cheer her up, however Shio's attempts at comforting her mother were often futile, as her mother fluctuated between many emotional extremes due to her past and current circumstances. Because of her mother's fear that her father would find them again, Shio's mother forbade Shio from leaving the house and got angry whenever Shio disobeyed her, despite Shio's intentions to help her mother feel better (such as going outside to pick a flower for her).

As her mother's state was gradually diminishing waiting for Asahi to return so that they could be happy, Shio begged her mother to take her outside so that she could find something to help fix her, but almost got in a car accident because of it. Shio was immediately brought back home and was scolded for wanting to go outside even though she only wished to help. For the first time in her life, Shio's mother slapped her, but quickly broke down due to the resemblance between her actions and her husband's abuse.

Soon after that incident, Shio's mother decided to take Shio outside again during a rainy night, and pushed Shio into an alleyway. Despite Shio begging for forgiveness and promising to be obedient, her mother stated that she no longer needed her, and left Shio by herself. It was at that moment that Shio encountered Satō Matsuzaka's and noticed that her "jar was empty, but not broken" because she still believed in something, unlike her mother's "jar", which Shio believed was broken due to her selfishness. This caused Shio to wish to forget everything that happened, and because of this, Satou chose to take her in.

Presently, Shio lives with Satou in their apartment and is often left alone for most of the day because of Satou's school and work obligations. She is perfectly capable of leaving the apartment (before Satou installs a lock from the outside), but does not do so out of her own will due to Satou telling her about the dangers of the outside world. She is blissfully unaware of the fact that Asahi is searching for her.

In the final episode of the anime, she sustained minor injuries and ended up in the hospital after hugging Satō as well as pushing them both off the roof of the apartment with Satō (who died from the fall). After Satō's death, Shio keeps Sato's wedding ring and her hair ribbon as a memento to remember her by, she also claims that she has been reborn as Satō, much to Asahi's horrific shock and believes that Satō will be reborn in the future. "This is my happy sugar life." - Shio, final words in the anime.

Shio cares and loves Satō deeply but often remains unaware of what she is involved in until the far off episodes, since Satō doesn't allow her outside of the apartment. While living with each other, Shio forgets her life before Satou. She thinks of herself as Satou's equal and wants to be treated as such, sharing the burden of all her problems so they can get through it together. Even when finding out about Sato's evil deeds she stands by her and the two even have a makeshift fake wedding, saying their vows and exchanging rings.

Right before they hit the ground after their suicide jump, Satou shields Shio from the impact, something that latter is confused about once she wakes up. Shio refuses her brother to the very end and states her love exists only inside her where the memory of Satou is.

Shio is her daughter, she regarded Shio as a more clingy child than Asahi but a sense of pureness to her soul (much like herself as a girl). Shio often saw visions of her mother when she is lost, causing her to delusion her mother over her shoulder.

After leaving Asahi and living in another apartment with Shio, she became more emotionally unstable. When Shio runs into the street on a visit outside, Yunna slaps her because she rebelled and has a flashback to being abused by her husband and her mind collapses. Feeling as she though she became what she hated the most, she decided that it would be best to leave Shio out in a crowded street. "I don't need you anymore," she told her, and left her all alone.

After leaving Shio behind, she returned to her husband's house, poisoned him, and muttered to Asahi who came to the apartment to pick himself up, saying "It's too late", and she became a factor that makes him rush to search for Shio. After the death of Sato, she was standing alone outside the hospital where Shio was hospitalized.

Officical Art of Shio and Sato

Shio's mother Yunna hallucination behind her

Shio as the angel Shouko sees her as, in the anime opening

Shio in the manga 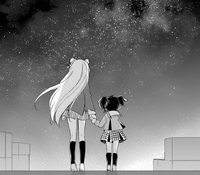 Retrieved from "https://happy-sugar-life.fandom.com/wiki/Shio_K%C5%8Dbe?oldid=1754"
Community content is available under CC-BY-SA unless otherwise noted.